Stepping into Africa in a season of learning deep trust

Posted on May 1, 2016 | Comments Off on Stepping into Africa in a season of learning deep trust 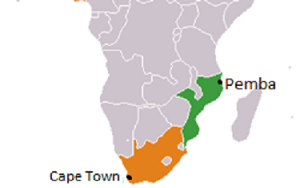 Three years ago, I wrote an article on growing in God through learning trust.  Now I’ve gone into an even deeper season.  I’ve been working as an admin and ministry volunteer since October 2013, and have not had paid employment since then.  I’ve been learning to live by faith, and we have not starved.  During that time, I have been extremely busy in ministry and outreach, which I believe may have been training for what I may be doing in the future.

Last year I applied to the Iris Global Harvest Mission School in Mozambique (for June – August 2015), but they asked me to wait until my husband Tony could join me.  At the time I was crestfallen by this request, but I could see in the long term that this was a very good idea.  Last year, Tony was not able to leave his job, and he did not have a desire to go to Mozambique.  This year is a different story, and his heart has been prepared to go.  He wants to go with me.  He retired from his full-time job in March 2016. We even are moving this week into a condo (May 2016).  We were able to downsize and sell our semi-detached home in record time, with a closing date 9 days before we leave for Mozambique and South Africa!  We will be in Africa May 25 – August 28, 2016.

The entire fund-raising process is always a walk of faith.  I’ve always been able to depend on this amazing church that I’ve been part of since 2000.  Yet, this time the circumstances are entirely different than the past six missions. Here’s why:

1. We can’t give tax receipts (partly because we are going to a school as well as a mission trip).
2. There are so many events in Ottawa that many people can’t make it to our own fundraising nights, and the only availability of two of our churches is Fridays – a busy night for most people.
3. My other full-time church became a mobile church 7 months ago, so they don’t have a venue available for their people to have a ‘party’ for us.  So, humanly speaking, it’s been a very hard sell.

However, God is faithful no matter what.  I already knew that He would provide in various ways – by touching the hearts of specific individuals without our knowledge.  Tony also had inheritance money that came his way at just the right time, so we were able to pay for our airfare to Mozambique and South Africa as well as our deposits to the school.  Tony’s insurance covered our malaria medication.  And we also took our yearly timeshare holiday early so we could apply for our visas in person at the closest Mozambican embassy (Washington DC).

I expected lots of people at our fundraisers, but instead of the dinners that I planned before previous mission trips, I chose a cafe night with a barista friend that included a powerpoint presentation and art show of some of my original art work.  We invited hundreds of people, and I expected maybe 80.  40 people showed up, but it was still an amazing time.  My drawing of iris flowers was raffled off and the lady who won it was blessed and amazed.  Some people who had meant to come donated on our GoFundMe Account, so I was at peace that funds were still coming in despite the lack of donations at the event (but for one, and no art sales).  The second fundraiser (a movie night with the “Compelled by Love” film, art raffle, auction and sharing) was even smaller.  My helper bought enough soda, water and popcorn to feed at least 60.  9 people showed up.  Only 9 people!  However, this was a different crowd, with some excellent questions.  We made a small amount that night, but then a dear friend of mine bought two pieces of art work!  This friend had meant to help with the raffle, but forgot about the event and was in the process of heading off to a Friday night healing service at a local church.  I texted her, and she came right over.  I’m glad she did – not only did she help with the clean up, but she bought a watercolour painting and a monoprint.  I had deep peace during the event, and a strange joy.  And I shared deeply about the season of trust that I had been in since October 2013.  I shared about our dependence on God for a future that is entirely in His hands.  Did we know where we will be going after our mission school (Pemba, Mozambique) and  extended outreach (Robertson/Cape Town South Africa)?  I did explain that we still have commitments in Ottawa for us to return to – but other than that, we’ve left our futures in God’s hands.  Do we want more?  Yes.  We are willing to just listen and hear what God is saying.

One prophetic friend did speak to me about a sneak peak that she received – and yes, it did show ministry overseas, likely somewhere in Africa.  We’ll see where God open doors as we continue to TRUST Him.

May you also learn the joy of trusting in a completely faithful God.  He is so loving and so very faithful.  If you’d like to read more about our mission, here is our prayer letter!

If you feel led to contribute, please do!  Here is our GoFundMe page.  It may seem like our budget is high, but that’s partly because nearly all of it is in US funds.  The Canadian dollar isn’t doing well in the exchange, but God is still more than able to cover all we need.

If you feel led to pray, this is what we need most. Thank you so much.

This entry was posted in Ways to Grow articles and tagged deep trust, Harvest Mission School, Iris. Bookmark the permalink.