Unpacking our journey in the Rainbow Nation

Posted on October 27, 2016 | Comments Off on Unpacking our journey in the Rainbow Nation

Hi! Tony and I continue to unpack from our adventures in Africa.  I shared in September about our Harvest Mission school in Pemba, Mozambique, as well as about building a house for a widow and her five children in that same town.  The house building is happening!  Next week, the Iris Mercy department is adding a roof to her new home.  The rainy season in Mozambique is from mid-late November until early March, so we are just in time to keep their heads dry.

I can’t deny that Mozambique was a challenge (although Tony thrived). We looked forward to South Africa – but only partly for the amenities offered (in a country with first world amenities and third world opportunities).   We found a varied nation that won our heart even deeper than Mozambique.  This is a divided land – which still bears the scars from the apartheid and colonial years.  We were in the Johannesburg area at an Iris base for three nights, due to a change in our flight out of Mozambique.  LAM (Mozambique’s airline) decided it would be more cost effective to move all Wednesday flights to Mondays, so this meant we had to end our Iris School a few days earlier. Rather than a one night stopover with our Western Cape team in a Jo’burg hotel, we now had three nights in limbo between the mission school and our outreach.  So the Iris base “Footprints” took us in as well as five other outreach teams.

We found Footprints was a wonderful base with a family of 32 sweet children, loving long term missionaries, and American visitors who were on their own mission trip.  We are incredibly thankful for their hospitality and the sparkle brought to us by bright and fun-loving children. Fierce love showered us by “Mama” Yolanda (the base leader), Natasha, her husband Mark, and others that showed deep kindness.  They took pity on my disability and that Tony had packed all our belongings together in three suitcases, rather than separately. Originally we were going to be housed with other guests in dorm according to our gender.  Thankfully, a long term missionary couple loaned us their cabin, so we were able to rest and get ready for our Western Cape outreach.  I brought maple syrup candies and Canadian souvenirs with me to share with the South African children in Robertson.  But we didn’t have to wait to share, since we had more than enough between the two bases.  So we gave away our goodies, via the leaders, so it was done in proper fashion, with each child receiving something.  The base leader spontaneously gave Tony an opportunity to teach the children about Canada (since their class was learning about other countries).  So as they learned about Canada’s flag and the maple leaf, while they enjoyed the taste of maple syrup candy.  These kids were very receptive, and it was wonderful that they could respond in English (a luxury we didn’t always have in Pemba, Mozambique).

We were really excited by the journey into Robertson, as two of the long-term missionaries, Kathryn and Barbara, drove us from the Cape Town airport.  Robertson is two hours east of Cape Town through mountains, and valleys where many wineries are located.  We were given plenty of opportunities to rest, relax, journal and pray.  The area is farming country, and farmers are, well, quite easy-going!  We were housed in a mountain homestead that had no cellphone signal, no wifi and the electrical power was generated by solar panels on the roof. Our homestead was located in a beautiful mountain valley, where my drawing inspiration exploded.  I had already drawn two drawings in Mozambique.  I drew at least five more in this place! Part of my practical ministry was to draw for base leaders Johan and Marie Fourie. They kept a drawing that was commissioned of national flags in a field (Flag World, shown above) and another that I gifted them of the house that we stayed in (Pomegranate Homestead shown below).  Because we were a couple, we are again blessed with our own room (with a toilet and shower!).  Our team of ten all shared cooking duties and spent a lot of sharing and prayer together.  We were from Australia, England, Germany, Ukraine, South Africa and Canada. 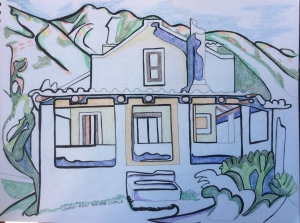 We visited nearby “townships” – neighbourhoods of either the local Xhosa tribe, or “coloured” community.  We fell in love with all of the people, but found the most receptive ones were the “coloured” people. These are a mixed-race people that seem to be forgotten in South Africa.  I had not known about this demographic group, despite their presence in a documentary I watched this spring about a ministry who works in some Cape Town townships. Many of these people (but not all) are in the service industry, and they are very hard workers. Many of the farm workers in the wine growing region are from this people group. We listened to, prayed for and loved on quite a few of these people as we walked through one of their townships.  We also worked with coloured children in an orphanage and others in the local hospital.  I found in particular a tender compassion as I was with them, and a sense that I was “at home.”  The local Xhosa (black African tribe) were also quite welcoming, although their township, Nkqubela, had an entirely different feel to it.  They felt more ‘typically African’ and we connected with them as well. (We also were in community with some local Afrikaans people).

We also worked with the local farm worker’s children through a nursery “crèche” and a weekly kids’ club. We found these youth quite rambunctious. I think they wore Tony out through their games of soccer, baseball and catch.  I helped in the art room, by helping children draw, as well as praying for them, loving them and speaking into their lives.  During the second week, we staged a play based on the Good Samaritan parable. Our South African team member played Jesus, and read scripture in Afrikaans. It was well received, as were our Canada flags, pencils, stickers and maple candy.  One of my most treasured moments was of one of the girls asking me about Canada. When I showed her a picture of northern lights I had on my phone, she wanted to see more. She’s now a fan of Canada and would love to visit us here in Canada. Also from this girl, I learned proper pronunciation of the Western Cape place names around us.

We also had a retreat in Whitsand, on the Indian ocean coast.  It was during that time that I was able to share with the Fouries about a series of dreams that Tony and I had while in Africa.  ALL of them pointed towards ministry in South Africa – especially the dream where Tony dreamed that I had a baby.  When he told me the dream, I knew that babies often symbolize something new or the birth of a new ministry.  But we were in Africa, so I asked Tony what colour the baby was.  He couldn’t remember – he didn’t think he even saw it.  Later during that day, I was given the same dream, and I asked in prayer if I could see the baby.  It was one of those dream-visions that you were wide awake so you could stop and pray. My prayer was answered, and I was shown the baby – which kept changing colour!  The baby was white, then turned black, then mulatto, then red, then yellow, and so on!  I wasn’t sure what that meant, at the time.  When I shared with Yohan and Marie, Yohan cried out in laughter, “it’s Rainbow Nation!”  When I heard that, it made perfect sense. Rainbow Nation is the nickname that Nelson Mandela had for South Africa.  And, that was only one dream. There were many more, as well as a deepening love for all the people there.  We felt we were more and more in tune with how that Iris base operates.  They see everything in terms of building family – which is exactly what a fractured society and people need, no matter the group or colour to which they belong.  It is Jesus who brings us into family, as is promised in Psalm 68: 5-6.  To me, these verses speak to South African townships:  Father to the fatherless, defender of widows – this is God, whose dwelling is holy.  God places the lonely in families; he sets prisoners free and gives them joy.”

Our hope is to be a spiritual mom and dad to a township in the Western Cape, while we also help with various ministries at the base.  I will definitely be drawing, and there is even a community radio station we could join, unless we are called to start another one. There is so much room for different ministries at this base – with different couples and families ministering in the area, as well as the long-termers right on the base/farm with the Fouries.  Meanwhile we have a lot of preparation work to do here in Canada, including a lot of downsizing, and finding people to take our place in ministries we do in Ottawa.  Please keep us in prayer for the process, since this isn’t official yet.  When it is, you can celebrate with us!

If you’d like to know more, message me.  To learn about the Iris Western Cape base, visit  https://www.irisglobal.org/robertson/home